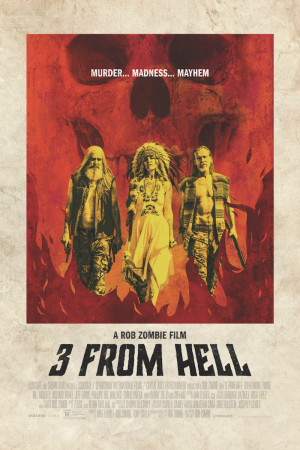 From the twisted mind of heavy metal’s Rob Zombie comes 3 From Hell, the third installment of the Firefly family saga!

By some unholy miracle, Baby (Sherri Moon Zombie), Otitis (Bill Moseley), and Captain Spaulding (Sid Haig) survive the Bonnie and Clyde-esque shootout with police from the end of The Devil’s Rejects. They are subsequently imprisoned but manage to use their deranged wit to escape to a desolate Mexican village. While the family enjoys the vices of Mexico, the son of one of their victims tracks them down to avenge his father.

Featuring the last performance by Sid Haig to be released in his lifetime, 3 from Hell is a gloriously bloody note for the Firefly trilogy to end on.