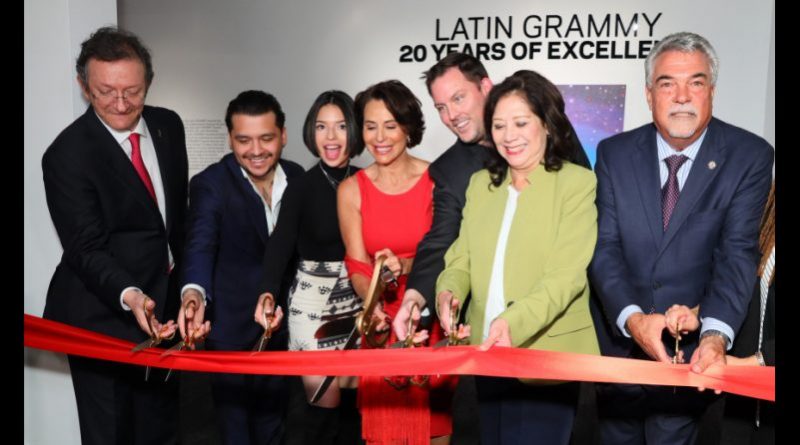 In honor of the 20th anniversary of the Latin GRAMMY Awards, The GRAMMY Museum with the Latin Recording Academy debuted the first permanent Latin music gallery of Los Angeles, the Latin GRAMMY: 20 Years of Excellence, on November 18, 2019. To further recognize the importance of this event, L.A. City Council proclaimed November 18th, 2019 “Latin GRAMMY Day”.

As Gabriel Abaroa Jr., President/CEO of The Latin Recording Academy and host of this monumental event announced, “Latin music is a worldwide influence and we are honored to partner with the GRAMMY Museum to showcase the talented musicians, monumental Latin music moments, and significant milestones that have contributed to its popularity…and look to the feature to showcase this beautiful art form”.

Michael Sticka, President of the Grammy Museum also added, “Our expanded partnership with The Latin Recording Academy will significantly increase the GRAMMY Museum’s impact by creating a consistent presence dedicated to celebrating the many genres of Latin music”.

A year of planning and months of construction for this two-million-dollar project has created a breathtaking exhibit on the third floor of the first Grammy Museum, established in 2008.  The exhibit displays an array of memorabilia highlighting two decades of the Latin GRAMMY show and its most iconic performances and special moments. This exhibit also features the cultural and social impact of this music nationally and internationally.

Highlighted memorabilia of the exhibit include:

Ricky Martin’s shirt from his musically innovative performance with the Blue Man Group, at the Latin GRAMMY Awards:

The first Latin GRAMMY Awards were held on September 13, 2000, with 39 categories. Today, it’s grown to an astounding 50 categories!

Having this exhibit in Los Angeles is monumental, due to this city being both “The entertainment capital of the world”, and the American city with the largest Hispanic/Latino population of 4.9 million (Pew, 2018).  A further donation by the Latin Academy, over half a million dollars, will be used over a three-year period to further extend this exhibit and other “Latin-inspired exhibits”. Further emphasizing the cultural and social influence Latinos and Latin music has had on the city and the music industry.

This historical exhibit is now open to the public as of November 20th, 2019 to Spring 2020. A must-see for anyone who’s passionate about music, L.A. culture, history, and/or the Latino experience.