Celebrate this holiday season with a dash of filth courtesy of John Waters, the Prince of Puke and our Director of the Month!

From a young age Waters was attracted to the strange and macabre. His desire to be in show business started following a guest appearance in the “peanut gallery” on the classic children’s television show Howdy Doody. While most children might become disillusioned when seeing how their favorite television show functions, Waters saw this and wanted it to be his life. At the tender age of ten he put on local puppet shows, enchanting the neighborhood children. Then at sixteen, his grandmother gave him his first camera, starting Waters’ early experimentation as a director.

Despite being kicked out of NYU film school, Waters was not deterred from his passion for film. With the help of a loan from his parents and the participation of his band of misfits, including the shockingly glamorous Divine, Waters created Pink Flamingos, an underground masterpiece described as an “exercise in poor taste”. This unexpected hit catapulted Waters career, establishing him as a godfather of both modern social satire and American indie films.

Waters uses film to criticize social norms with tongue-in-cheek humor, whether it’s a cult favorite from his Trash Trilogy or an upbeat musical like Hairspray. He fought film censorship and forced audiences to question their beliefs, stances that took on further significance in light of Waters’ status as a gay man. Using his platform for gay rights and pride, he became an important voice for LGBT cinema and culture in America at a time when being gay was demonized and even criminalized in some jurisdictions.

Today, Waters is a pioneer of cinema along such giants from his generation as Martin Scorsese and George Lucas. All hail the Duke of Dirt for making filth look so fabulous! 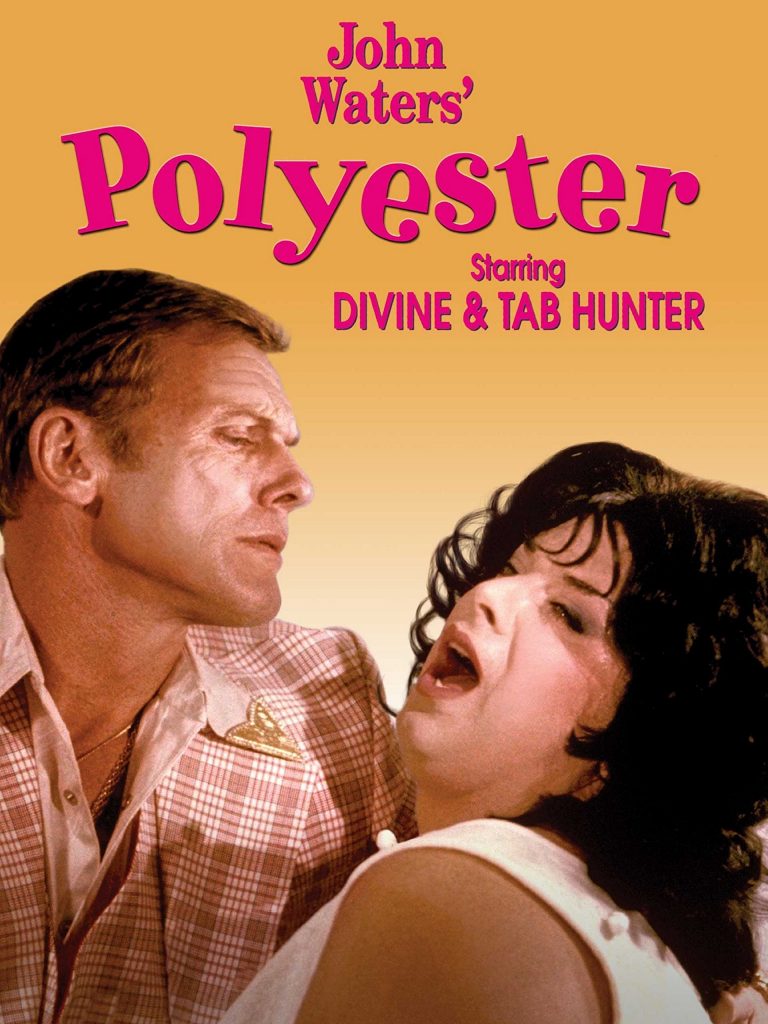 Catch a whiff of “Odorama” with Polyester, a comic classic from the Pope of Filth!

Hefty housewife Francine (Divine) and her extremely dysfunctional family, are the black sheep of their middle upper-class Baltimore suburb. With her adult movie theatre owner husband cheating on her, their delinquent teenage children running amok, and her cocaine-sniffing superficial mother constantly berating her weight, Francine turns to alcohol. Suddenly, her life and family begin to turn around as she starts a romance with the dashing Todd Tomorrow (Tab Hunter), but is this new romance really all it’s cracked up to be?

Presented with scratch-n-sniff Odorama cards, Polyester is truly a film experience unlike anything you’ve ever smelled! 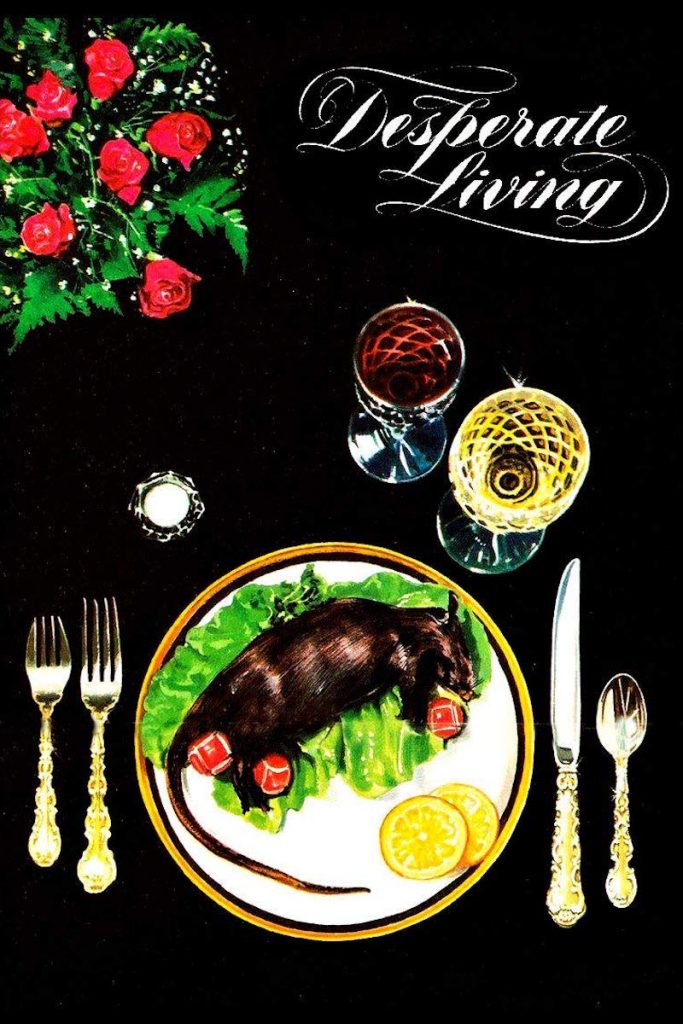 Live a little with Desperate Living, the second installment in Waters’ Trash Trilogy!

Wealthy housewife Peggy Gravel and housekeeper Grizelda Brown are on the lam after murdering Peggy’s husband. After the pair are arrested and assaulted by panty-sniffing policeman Turkey Joe, they find themselves in a town called Mortville where they get entangled with the sex-change-seeking wrestler Mole McHenry. All the while, the town’s tyrannical ruler Queen Carlotta continues to terrorize her subjects, with Peggy and Grizelda now in the thick of it.

Widely considered a staple of the queer horror genre, Desperate Living is a hilariously twisted offering from Waters. 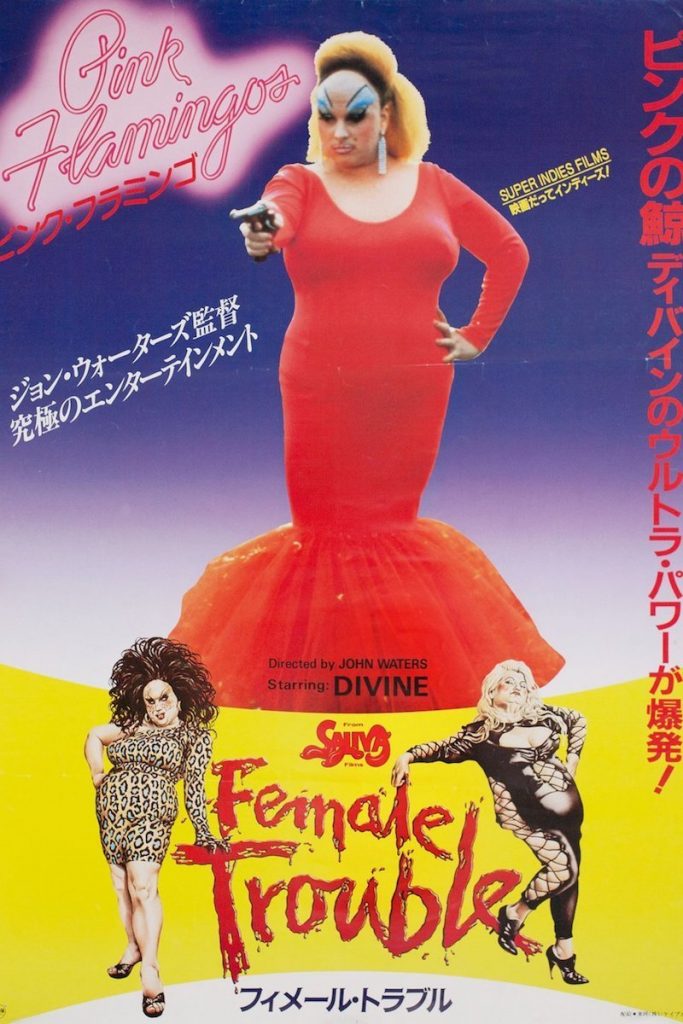 Wrapping up this month’s holiday filth-tacular is a double feature of Waters’ funniest and filthiest films, Pink Flamingos and Female Trouble.

An infamous celluloid counter-culture explosion, Pink Flamingos stars regular John Waters collaborator and legendary drag queen Divine as an exaggerated version of her outrageous self. In this case, she’s a trash-talking hedonist who fancies herself “the filthiest person alive” and lives in a motor home with her mad hippie son Crackers, her “traveling companion” Cotton, and her infantile mother Edie, who spends her days gorging on eggs in a giant crib. When Baltimore locals Connie and Raymond Marble – “two jealous perverts” who sell heroin to schoolchildren and kidnap and impregnate female hitchhikers – decide that they themselves are “the filthiest people alive,” this sets off an epic battle of wills that culminates in a shocking climax and a most infamous final scene.

Divine returns in Female Trouble, her second shamefully side-splitting collaboration with Waters. This rollercoaster adventure follows the life of bad girl teen Dawn Davenport (Divine), who only wants a pair of cha-cha heels for Christmas. When she doesn’t get them, Dawn runs away, gets pregnant, and falls into a life of crime with her high-school pals Chiclette and Concetta. Through a series of comedically deplorable events including an acid attack to the face, Dawn becomes a model for two deranged salon owners, playing into her notion that “crime and beauty are the same.”

Pink Flamingos and Female Trouble are both rated NC-17. No one under 17 will be admitted and viewer discretion is strongly advised.