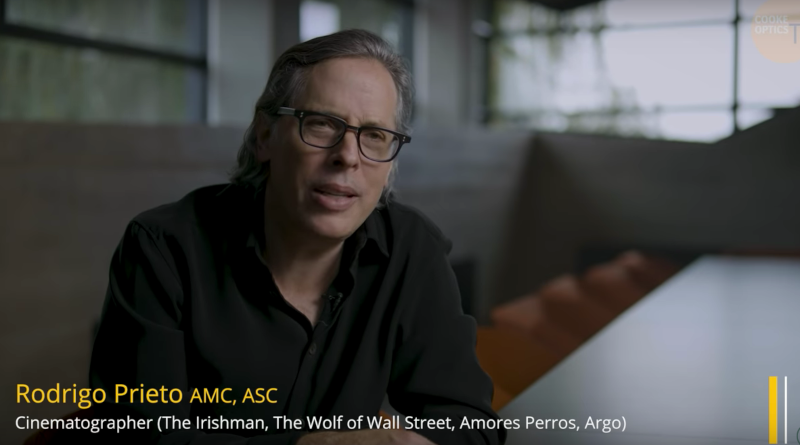 Martin Scorsese’s recent film The Irishman on Netflix has become a hit with critics and audiences alike and with members of the Academy of Motion Pictures Arts and Sciences who just gave the film 10 Oscar nominations.

Though filled with the Scorsese trademarks, its most notable feature is the CGI effects used to de-age the main actors, Robert De Niro, Al Pacino and Joe Pesci, thanks to its Oscar-nominated cinematographer Rodrigo Prieto.

Prieto was born in Mexico City, Mexico. He’s known for his style of “strong moody lighting”. As well as experimental and unconventional camera techniques.

Over his career, Prieto has worked with a variety of highly respected American and international directors, including Oliver Stone, Ang Lee, Pedro Almodóvar, Spike Lee and multiple collaborations with Alejandro Gonzalez Iñárritu.  He has also collaborated with Martin Scorsese in three films, including The Wolf of Wall Street, Silence and now, The Irishman. For his cinematography work with Ang Lee (Brokeback Mountain) and Scorsese (Silence), Prieto received two Oscar nominations for Best Cinematography.

In The Irishman, Prieto faced the challenge of visual journey within 309 scenes and 295 different sets. Influenced by still photography, he used color science to create distinctive colors for each decade. From the use of Kodachrome emulation to emphasize colors and brightness for the film in the 1950’s, to the end of the film being colorless and bleak through bleach bypass.

For the CGI de-aging of the main actors, Prieto had to use three cameras, a primary camera and two witness cameras to capture each angle. He also used infrared tracking marks on the actors as visual markers for the CGI in post-production. At times, there were as many as three of these “Three Headed Monster” cameras capturing the actors.

Soon after its release on November 27th, The Irishman soon went on to win the Board of Review’s Best Film of 2019.  It was also honored as one of the ten AFI’s Motion Pictures of the Year 2019 list; with 5 Golden Globe nominations. Adding ten (10) Oscar nominations to this impressive list, one of those for Prieto for Best Cinematography.

With all of the critical praise and recognition The Irishman it’s no doubt on its way for Oscar gold. If nominated for Best Cinematography, Prieto could become the 5th Latino to win Best Cinematography. Continuing the strong and growing presence of Latinos behind the camera.

Latino Oscar winners for Best Cinematography up to 2019:

Oscar Nominated Latino cinematographers up to 2019:

Gabriel Figueroa (The Night if the Iguana)

Honorable Mentions: Other Latino/Hispanic Cinematographers in films of 2019:

Javier Aguirresarobe (Dora and the Lost City of Gold)

Julio Macat (After the Wedding)